Yes, You Need a Contract… ALWAYS! 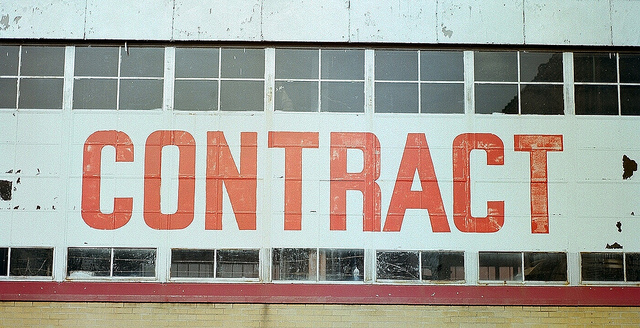 I got a call the other day from a client who told me that her contractor walked off her home remodel job. She paid him in full up front, and now he has left her house unfinished for months while she lives in a rented apartment.

She finally decided to bring me in once she realized that leaving messages day after day for the deadbeat contractor that inevitably went unanswered was never going to get her what she wanted: a finished job.

“Send me over a copy of the contract, and I’ll take a look,” I told her.

“He never gave me one” she sheepishly replied.

“So, how do you know what he agreed to do, by when, and for how much?”

There was silence on the other end of the phone.

And although I had some thoughts for her about next steps, the reality was that her options were severely limited without having anything in writing.

You might not think you need a contract for your simple business transactions, but trust me – you do. Taking a little time up front to negotiate your agreement, ensure both parties are clear about their expectations and obligations, and then PUT IT ALL IN WRITING can help you from both being sued, and also from having to sue someone else.

Now you might think, “Really? A lawyer telling me that I need to hire him? That’s novel. Of course he’s pushing for a contract because isn’t that how attorneys make money?”

The answer to that is: not really at all. Drawing up or reviewing a simple contract isn’t exactly a cash cow for an attorney. Litigation is what becomes costly, and when you have a clearly drawn, fully executed contract, it ultimately will save you in many ways — financially, emotionally, and otherwise. Without a contract, or even with one that’s not explicitly written, the losses mount as these cases tend to devolve into a “he said, she said” scenarios that leave you out of time, out of recourse, and often out of money.

Since I am dedicated to making my living by helping teach people how to stay out of trouble, conflict, and court, let’s take a minute to consider what a solid contract is, and how you can make sure having one works for you.

We enter into contracts every day, sometimes without even realizing it. Think about what happens when you create a new account online, for example. You can’t complete your profile without checking the “I agree to the Terms & Conditions” box, but who reads that anyways – right?

This happens all the time offline, too – when you order cable, phone, and Internet service; when you buy insurance; when you purchase appliances; when you sign your child up for school, and so on. The list is endless, and all of these relationships are contractual in nature.

Moreover, most of these contracts are non-negotiable; so don’t beat yourself up for not reading the fine print. (Or, maybe you should… but that’s a blog post for another day…!)

What about the contracts you enter into with a third party that you do have control over? How about agreements where there are mutual promises exchanged, mutual obligations imposed, and certain requirements in terms of the expectations of both parties to the contract? Maybe you’re hiring a contractor to do some work on your home, ordering materials from a company to supply a service that you need, booking a caterer, entering into an employment agreement, forming a new partnership, purchasing a property, starting a new company, or investing in a company. Any and all of these issues will give rise to the need for a written contract.

It’s a must have kind of thing – not once in a while, but every single time.

And yet it’s pretty common to hear people rationalize away their rights to a written contract – “I don’t need to bother with it because what it’ll cost me to get a lawyer is more than the whole deal is worth.”

Or worse, if a legally dense document is provided by the other side, and it’s, “I don’t understand what this says, but I’m sure it’s fine” – which can result in having an agreement so skewed that it’s worse than having nothing at all.

Either way, it’s a lose-lose proposition.

You have to be crystal clear when articulating the respective expectations for how the business or contractor agreement will work in real life. Ensuring that you understand all aspects of the agreement, and your would-be collaborator does as well is incumbent upon you. A contract is a two-way street; so be savvy and proceed with caution before you move forward.

Back to my client with the long-gone contractor who took all her money and left her hanging with no written agreement. I contacted the contractor, and he did respond to me. He told me that he completed all of the work for which he was paid, and that my client “refused to pay [him] to finish.”

I called my client back and gave her this news. She responded by telling me that he was “lying” about what they agreed to. She restated that she had paid the contractor in advance, in full, to “complete the entire house.”

“That’s not what he said,” I told her. “And what he said, or what you said, doesn’t matter in this situation. He feels that you owe him more money to complete the job, but you’re unwilling to pay. His perspective is the opposite of yours, and neither matters in a sense because you don’t have anything in writing that says otherwise.”

As I paused to let the reality sink in, I could hear my client start to cry on the other end of the line.

She was stuck in the aforementioned proverbial “he said, she said” situation. And what “he said” stood in the way of her moving back into her home. And no matter what “she said” . . . she was out of luck. While she could theoretically sue the contractor, there clearly was a difference of opinion about what they agreed upon (i.e., costs, materials to be used, timeline, etc.), and it would be much more difficult to make a case. And it would increase the chances of her losing even if her recollection of what they agreed to was in fact accurate.

At the point we spoke, she was already 20 months into the project, so she was in deep. The only choice my client was left with was to try to negotiate with the contractor she’d started with or find someone else. Regardless, I counseled her to get specific commitments regarding the materials, timeline, and cost to finish the job, and to get those new terms signed, sealed, and delivered in a clear, concise document that we call… a contract.

And while it’s true that having a contract doesn’t guarantee that it will not be breached, at least you’ll be able to prove what was agreed upon. More often than not, that saves you the time, money, and stress that come with trying to make a case when you’ve got nothing tangible to fall back on.

One more time for the record: Get it in writing!

contract,
contracts,
get it in writing,
negotiation,